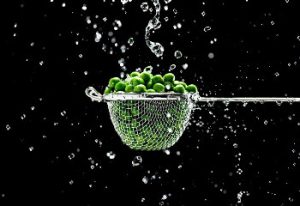 It was a dark and stormy night, Rick and I were becoming restless, and we needed something warm and comforting to get us through those drab winter night, nights that begin at three in the afternoon. After a moments thought we remembered what there is only one thing than can transform a day like this into a warm and cozy one, and that is a big bowl of steaming hot split pea soup..

Peas have been harvested worldwide since the Neolithic age.

People of Europe connected peas, beans and legumes with the underworld. People would place peas in coffins in honor of the dead, a tradition that survives today. Peas are also served in western Europe on all saints day, a Catholic holiday commemorating all the souls who have departed this world and gone on to the… wherever  . The Europeans called peas “soul food,” and would serve it to the poor.

All Souls day was originally a Celtic festival in which the living served food to the dead, believing that on this day the dead returned to earth to be fed. It was believed these returning souls could be dangerous and they were feared, therefore great lengths were taken to “appease” them.

Legumes have always been associated death and especially with the underworld, some people linked these foods with evil forces. For this reason peas and legumes were avoided at certain times of the year like Twelfth Night, for instance superstitious Germans believed that ancestral spirits walked the earth; so the living would not partake of these foods for fear of upsetting these spirits.

On St. Johns Eve, the time of the summer solstice, legumes entered into the picture for their supposed connections not only to evil influences but also to fire. In medieval legend peas were associated with lightning and hail, perhaps do in part to its climbing ability and that familiar sulfurous odor that results from eating them. It was this very odor that caused Pythagoras to ban the eating of beans entirely believing this escaping air was the souls of the dead having found there freedom to ascend to heaven.

Dragons were believed to carry peas through the air and hurl them down from the sky to fill up the wells. So people would light bonfires on the summer solstice to scare away the dragons. Other legends linked peas with fire as well: The Germanic dwarves known as Zwergs, who forged Mjölnir, the mighty hammer of Thor that hurled fiery thunderbolts loved peas. In legend, Zwergs so highly valued peas that they considered them to be treasure, so at night they raided the fields and stole them.

Remember the valley of the Green Giant? It was the land of the cute little sweet pea. Peas play a cultural role as we refer to people as pea brains, or sweet pea.

The pea, or study of has led to our now common means of identification, DNA testing. In 1853 Gregor Mendel, Augustinian monk/scientist began extensive research in the area of plant variations. He cultivated and tested 29,000 pea plants; his research led him to the discovery of the genetic code. He discovered the principles of heredity and inheritance. His studies were ignored and then rediscovered in the early 29’th century.

Peas are also healthy. They have been found in Egyptian tombs carbon dated as far back as 9750 BC. This is probably because peas are always the first to plant and the first to mature. Peas were a staple food in Northern Europe especially for the poor.

People would make a large pot of peas porridge and often live on this for extended periods in the winter months. How horrible, can you imagine how these poor people would react if we took them to a buffet?

Fortunately peas contain essential nutrients and phytochemicals,  ½ cup of peas contains only 62 calories,  4 grams of protein,  4 grams fiber,  vitamins A, b vitamins, iron,  zinc, folic acid,  potassium and magnesium.  Like other legume peas contain purines, which can precipitate an attack of gout, I strongly advise these people not to eat peas.  So Jungle George, I know you’re reading this so tell Kathy not to eat peas. It’s unfortunate the exorcist has given split pea soup such a bad wrap, but we love it, as many people do, so today this is my recipe, I bake corn bread to serve with it.  Rick loves it.

Bake ham hocks in a large pot covered with water for 2 hours on 350. Add the other ingredients and bake 2 more hours or until peas are soft and soup is thick.

This is my all time favorite bumper sticker:  “ Visualize Whirled Peas”
Crystal Hayes can be reached at crystalhayes@peak.org