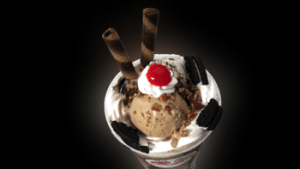 I scream, you scream, we all scream for ice cream! These calls were first heard in New York City in the mid 1700s. Italian immigrants yelled I Scream, Ice Cream; in the streets as they peddled their hand cranked ice cream from their little pushcarts.

Our obsession with frozen treats began long ago. Solomon said, There is nothing new under the sun, and this is most certainly true of ice cream. Icehouses have been in use in Japan as far back as 1100 BC. Alexander the Great in the 4th century BC had ice and snow hauled down from the mountains and put in covered pits so he and his soldiers could enjoy cold wine while conquering the world. Nero, the roman emperor in the first century AD sent slaves to bring snow down from the mountains, and then he mixed fruit juice, pulp and honey to make a form of slush.

Eventually milk and cream were added to iced drinks. The first record of ice cream in England is 1672. It was served at a feast for the Knights Garter held in St. George hall in Windsor castle. It was not until 1772 that the commoner received instructions on how to make it. Mr. Borella, confectioner to the Spanish ambassador, published

The Court and country confectioner to teach the housewife how to make ice cream. The Cafe Frascati in Paris opened across from the opera in 1789; this was an elaborate ice cream/gambling parlor that allowed Men Only. Ladies were allowed to sip their ices on little cafe tables outside. These types of parlors were the beginning of today’s ice cream parlors.

Cones made their first appearance in Italy in the 1600s. Traveling waffle makers made and sold waffles from carts, they were called wayfarers, The waffles eventually became thinner and rolled then filled with ice cream. The first mention of ice cream in a cookbook was in the 1770s and the wafer was mentioned in The Professed cookbook in 1769. Before ice cream cones and sodas ice cream was licked from a dish or rolled in paper, it was called by many names, like oublies, plasiers, cornucopias, or tutees, which means, eat it all.

Id like to see a national holiday declared for an American woman named Nancy Johnson. She invented a machine for making ice cream in 1846. She created the portable hand cranked ice cream churn, which beat the mixture of cream and flavorings with a paddle (known as a dasher). About 20 minutes of cranking was enough to thicken the ice cream.

Ice cream sodas are so good they were actually banned. This was one of what were referred to as the blue laws The righteous found the sucking of sodaon the Sabbath to be a disgusting act that is no doubt a sin. They called it the Sunday Soda Menace.

On July 8th 1881 in Two Rivers Wisconsin, a druggist came up with the idea of pouring syrup on top of the ice cream and topping it with a cherry. So as not to offend, it was christened the Sundae.

The 1904 worlds fair introduced us to the ice cream cone. An ice cream vendor as luck would have it, just happened to be set up right next to a waffle maker. The ice cream man ran out of paper cups to serve his ice cream in, so the waffle guy made some waffles and rolled them into cones plopped a ball of ice cream in it and the world was changed forever. In 1920 the Good Humor Man in tiny trucks with bells replaced the pushcart. A man who adhered to an ancient belief that the humours of the mind could be controlled and improved by what one eats invented the good humor bar, a block of vanilla ice cream on a stick.

Today, Americans consume an average of 20 quarts per year per person, at a cost of $20.1 billion a year.  The newest craze in ice cream land is the great big new and improved ice cream cookie sandwich, check out this Portland based company.

Thirty years ago when I was learning to cook I discovered something so easy even I could do it; Baked Alaska. This originated in 1876 at Delmonico restaurant in N.Y in honor of Alaska becoming a state. Impress your friends with this easy dessert.

Top ice cream and brownies with meringue and broil in the oven for about a minute, don’t take your eyes off it, when peaks are golden brown take out and eat.