I love to be all cozy and warm on stormy days like today. The wind pummels the world outside while the fire cracks and pops. It’s just lovely.

The distant sound of a football game in the other room reminds me of the super bowls ever looming presence, I need to begin to plan Rick’s Superbowl feast. Each year I try to find new and exciting snacks to increase his big game pleasure. The cheapest easiest stuff will be just fine, so I always make guacamole. He loves it and what could be easier than smashing ripe succulent avocados. 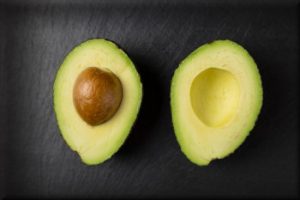 The avocado goes well with football as it is a manly fruit, its Aztec name ahuacate, means testicle.  Long ago the avocado had a reputation for inducing sexual prowess and had to be eaten and purchased in secret. Avocados could destroy ones reputation. The avocado originated in Mexico. What a surprise! Ancient pottery depicting pictures of avocados has been found in Mexico dating from 8000 to 7000 BC. Pre-Columbian Americans held the avocado in high esteem and used the oil to anoint during religious ceremonies. They called it the alligator pear because of its rough skin.

A myth from South America explains the growth of avocado trees throughout the forests of Guiana. A man named Seriokai loved avocados, and he spent a lot of time traipsing through the Forrest with his wife, climbing avocado trees and gathering the fruit. One-day Seriokai’s wife attracted the attention of a tapir, and the tapir and the woman fell in love. The woman desired the tapir so desperately she devised a plan to sneak off and run away with the tapir. One day while Serioka was up in an avocado tree, when he climbed down his conniving wife struck him with an ax and left him for dead.

As luck would have it, his neighbor found him and slowly nursed him back to health. Mean while, the woman and the tapir had traveled far, and avocado trees had sprung up along their path where the woman had dropped seeds. Bent on revenge, Sarioka followed the avocado trees to find her. He found large tree, then smaller ones, then sprouts then seeds and his wife’s foot prints. He spotted the tapir and shot it with an arrow. According to legend, Seroika, his wife and the tapir live on in the sky; Serioka is the hunter Orion, his wife as the Pleiades, and the tapir as the Hyades.

The Mayan, the Aztec and the pre-Incan peoples of Peru also cultivated this fruit. They used the oil for cooking and in there lamps for light. The avocado provided people with essential oils, vitamins and protein. In 1833 Judge Henry Perrine planted the first avocado tree in Florida.

The oldest living tree lives on the University of California campus and was planted in 1879. The avocado was an immediate hit among westerners that love its rich flavor and buttery consistency. The healthiest kind of fat is monounsaturated; this form of fat does not cause cardiovascular disease. Monounsaturated fat lowers bad cholesterol and is therefore more protective. It is wise to eliminate all forms of artificially hydrogenated fats found in packaged foods and margarine. These also contain TFA the unnatural trans-fatty acids responsible for heart disease and atherosclerosis. The best fats are avocados; the best oils are extra virgin olive oil and grape-seed oil.

Never stay in a place where oil is burning the fumes highly carcinogenic. Avocados are a great source of folate, vitamins A, C, E, B6, iron and magnesium. An avocado mask is rejuvenating for skin; it softens wrinkles and re-hydrates dry skin. Avocados are fattening, there are 200 calories in 4 ounces. I wouldn’t worry about that, they are a great substitute for butter or mayonnaise on sandwiches; I like to put slices on Rick’s omelets in the mornings. Never cook an avocado, they become bitter. Apparently avocados are afraid of the dark so if you put them inside of a paper bag you can scare them into ripening. Each year in October a little town called Carpinteria in California between Santa Barbara and Ventura hosts the California Avocado Festival. I found this “2005 first place winning guacamole” recipe on their web site.

I hope you try this…  it’s pretty darn good.

This is Gayle Bamber of Fallbrook California’s winning recipe.

Smash it all in a large bowl serve with corn chips or on an omelet.

Crystal Hayes can be reached at Crystalhayes@peak.org