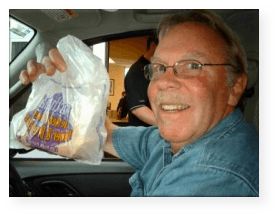 Well that happened thanks to native Oregonian Jacoby Ellsbury, from Madras who is an outfielder for The World Champion Boston Red Sox. He made it happen as part of the “Steal a base, Steal a Taco” promotion by stealing the first base of the World Series in the 4th inning of the second game. With that Taco Bell set a date for the following Tuesday from 2:00 pm to 5:00 pm where anyone could go into a Taco Bell and get a free Taco.

It’s estimated that 8 million were given away costing Taco Bell between 8 and 12 million dollars plus 4 million to advertise the “unprecedented marketing event” on TV.

During the games the promotion was mentioned countless times and one player shortstop Royce Clayton, was wearing a microphone and was asking other players including Ellsbury if they knew that if someone stole a base everyone in the country could get a free Taco. “Everybody?”
Ellsbury asked, “Everybody in American” Clayton answered.

Later Clayton was talking to Outfielder Coco Crisp and told him “you could go into every Taco Bell in the world and say I ain’t got my Taco, how they gonna know?” He was correct, you needed nothing, just go into a Taco Bell and ask for the free Taco and they gave you one. Taco Bells were hopping during those hours and of course many people bought stuff to go with the freebee; soda, burritos, Mexi-fries and other goodies and that’s what Taco Bell was banking on and it worked. However Americans are creative and there were lots of ways of inflating the free meal into a pig out.

A group of teen-agers in Wilmington Del., received their first free item in drive-through windows of one Taco Bell, and then got a second by standing in line inside the store. They repeated the process at several outlets “until they couldn’t eat any more,” said Jose Cofino, the vice president of Taco Bell’s East Coast zone. I know a guy called Pinball who lives in Portland and loves to do goofy but challenging projects. He and his teenage son are computer wiz’s so they got on the internet and got the locations of all the 10 Taco Bells in Portland, used their GPS programs to map them a route covering all of them and during the free time they hit ‘em all and ended up with 20 free Tacos.

I’m sure they weren’t alone but Taco Bell didn’t mind I’m sure, the publicity they got was worth it and folks should be sending thank you cards to Jacoby Ellsbury a small town guy whose old home town high school football team and two coaches traveled 93 miles to Sandy for their free Tacos since they don’t have one in Madras yet! As they often say “the best meal is a free meal”, thanks Jacoby, my girlfriend and I enjoyed ours!